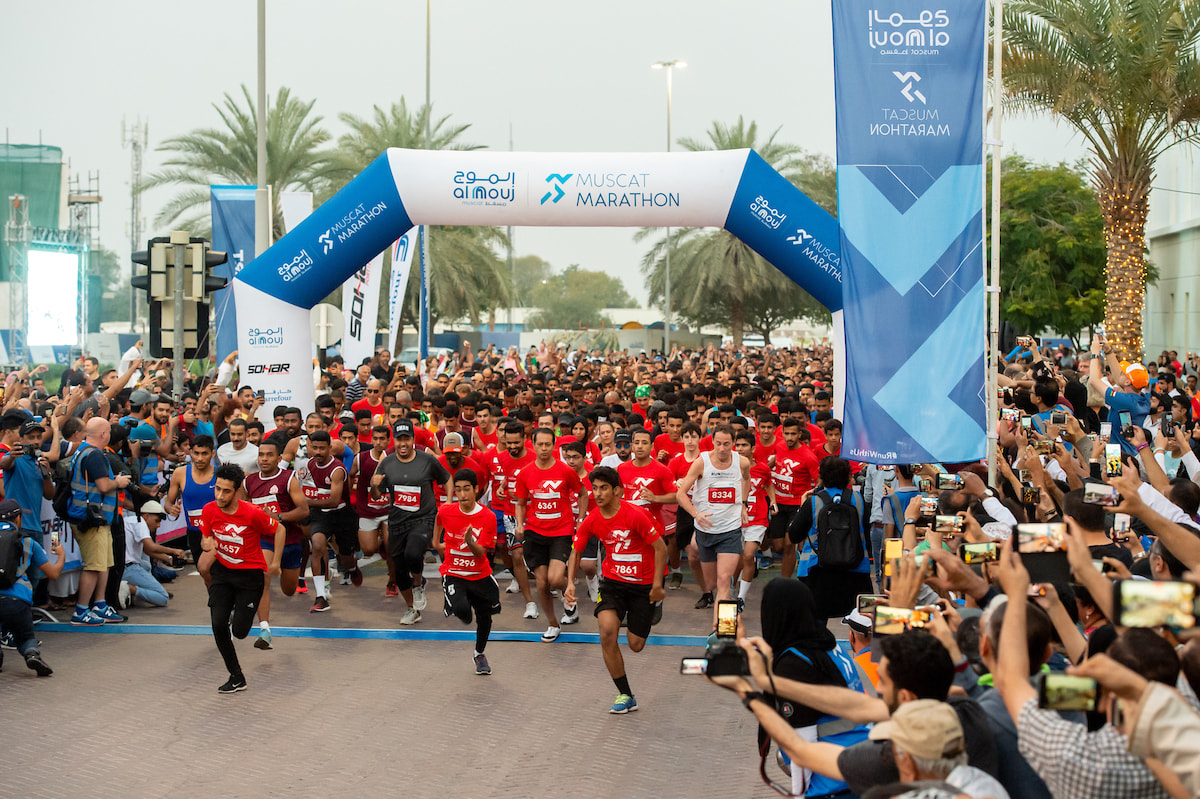 Muscat, February 22nd 2020: The future of running in Oman was on show on day two of the 2020 Al Mouj Muscat Marathon as thousands of children took to the streets in a display of fun and good sportsmanship.
After the elites and marathon runners took the glory on day one, the second and final day of the 2020 Al Mouj Muscat Marathon belonged to the thousands of children who took part in the 3KM, 2KM, and 1KM races.
One group of children in particular went the extra mile; with the help of Sohar Port & Freezone, almost 900 kids got up in the dark to bus from Sohar to Al Mouj in Muscat, and their enthusiasm added plenty of fun and colour to the day.
Day 2 began with the sold-out 5KM Charity Race, which was held in aid of the Oman Diabetes Association and Environmental Society of Oman. In a moving tribute before the 6:30am start, the runners held up a banner to both celebrate the memory of the late His Majesty Sultan Qaboos bin Said Al Said, and to congratulate his successor, His Majesty Sultan Haitham bin Tariq Al Said, as he leads the nation forward. 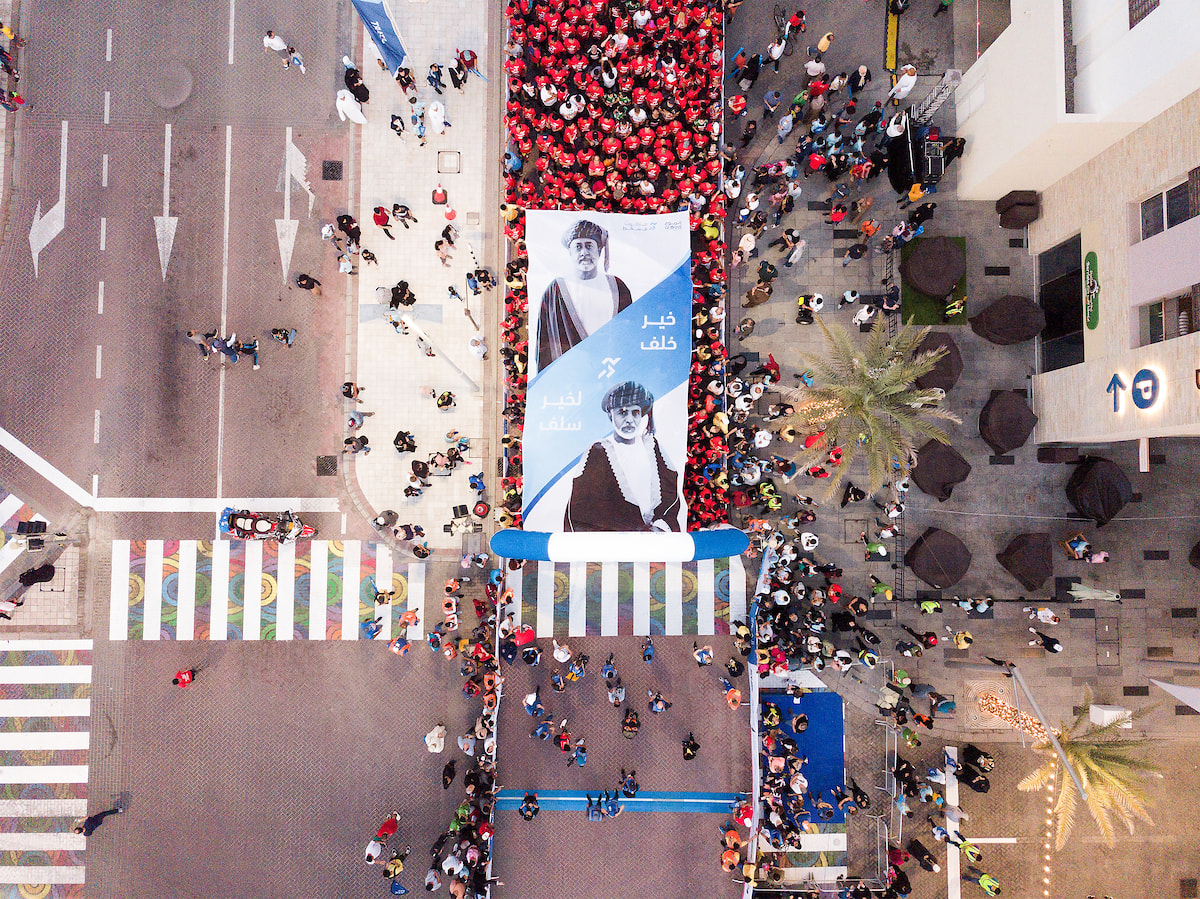 The large 5KM field got off to a lightning fast start, led by Ahmed Aqeel Al Ansari who completed the course in just 17 minutes and 32 seconds, while fellow Omanis Wadah Al Fulaiti and Mubarak Al Rubkhi were second and third. The women’s 5KM champion was Stephanie Macleod of Great Britain, who crossed the finish line in a time of 22:01 ahead of Zohreh Hashemabadi from Iran and South African Lindie Jacobs.
Then it was the turn of the younger runners. Aged from just seven to 12 year of age, the thousands of children took on the Kid’s Run Challenge on three courses – 1KM, 2KM and 3KM – which were won by Osama Salim and Naira Amry, Hamed Al Hasni and Hia Lawati, and R Nahul and Nina Soldaini respectively.
Marathon legend and Al Mouj Muscat Marathon Global Ambassador Paula Radcliffe spent much of the day running with the children and said: “It was so great to see the looks on the faces of the kids, see their enthusiasm and what it means to them to achieve.
“For me, that’s what this event is all about. To inspire those youngsters to discover running, to discover the community of running, the joy of running. What it can bring to them and how it can help them. Just to see that look of achievement on their faces when they crossed the finish line is so rewarding.”
A new addition to the 2020 edition of the Al Mouj Muscat Marathon was the Two Medal Challenge. More than 200 people opted to really test themselves and compete on both days, backing up from the marathon, half-marathon or the 10KM by running in Saturday’s 5KM Charity Race. Among them was Britain’s Paul Freary, who came sixth in the 5KM after claiming 14th place and topping his age group in the 10KM on Friday.
Paul said: “It was hard to come back on day two after running the 10KM but I thoroughly enjoyed it, it was lovely to be out there.”
Local sporting heroes were on hand to inspire and cheer the runners on, including Omani tennis star Fatma Al Nabhani, who was one of the #RunWithUs Ambassadors and ran the 10KM on Friday, before returning to cheer on the other participants on day 2.
Fatma said: “I didn’t expect this experience to be so amazing, I had so much fun! 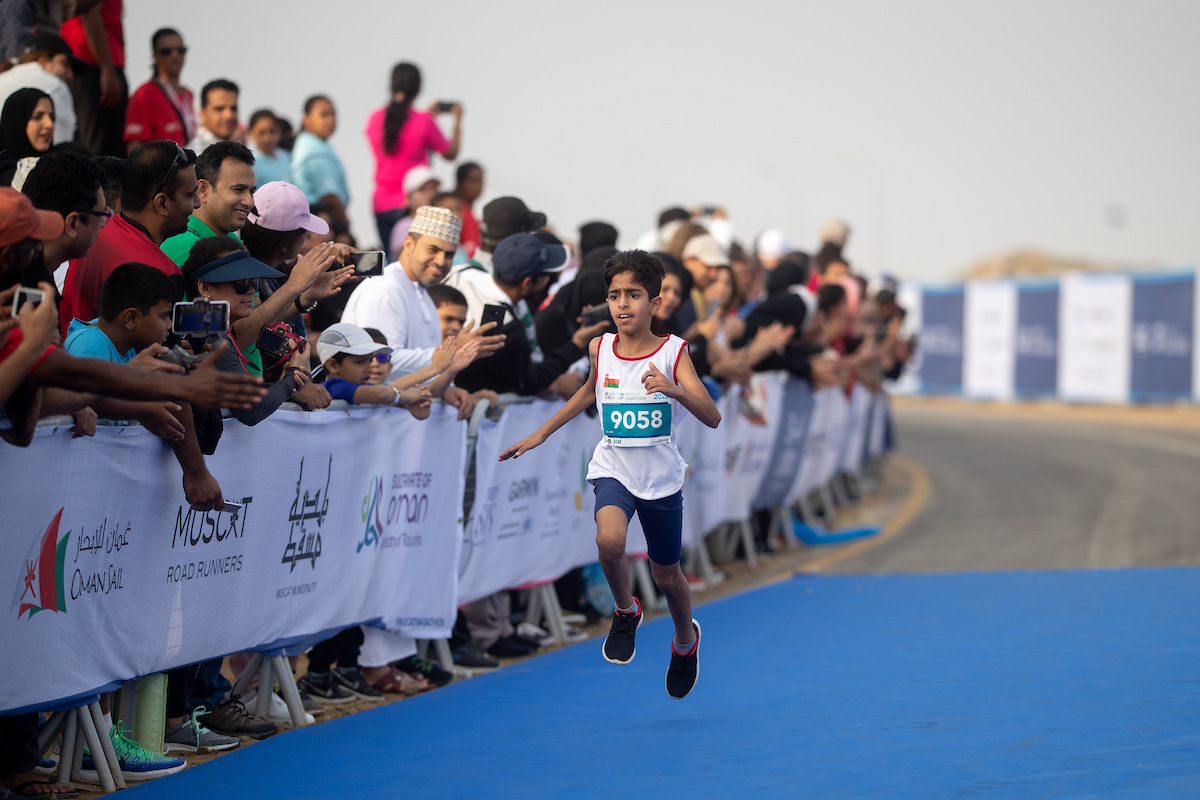 “To be honest, I didn’t think that I would be able run the whole 10KM but I am really proud of myself and it was such a great feeling on the course. Seeing everyone supporting each other while competing was amazing.”
The final runner crossed the finish line just before 10:00am, bringing an end to the event which saw more 10,000 people from 102 countries take part in the seven races held across the two days. The efforts of all who took part were recognised at the official prizegiving ceremony, which was attended by Her Excellency Maitha Al Mahrouqi, Undersecretary of the Ministry of Tourism; Sheikh Aimen Ahmed Sultan Al-Hosni, CEO of Oman Airports; David Graham, CEO of event organiser Oman Sail; Mark Geilenkirchen, CEO of Sohar Port & Freezone; and Najib Haddad National, General Manager of Carrefour.
Oman Sail CEO David Graham said: “The 2020 Al Mouj Muscat Marathon has been an incredible display of good sportsmanship and spirit.
“The record number of participants not only shows the serious impact this event is having on sports tourism, but it was also lovely to see how many Omani children took part. Encouraging children to be active is core goal for us at Oman Sail and we are working with the Ministry of Health, the Ministry of Tourism, our stakeholders and ambassadors like Paula Radcliffe and Fatma Al Nabhani to keep encouraging children to be healthy, active, and have fun through sport.
“Congratulations to all those who took part and a thanks to the residents of Al Mouj, whose cheers and support helped spur our runners on. Al Mouj is a beautiful setting for this iconic Omani event and it would not be possible without their support.”
Pre-registration is now open for the tenth edition of the Al Mouj Muscat Marathon, which will be held in early 2021. To be the first to secure a place on the start line, register here: muscatmarathon.om/pre-register.