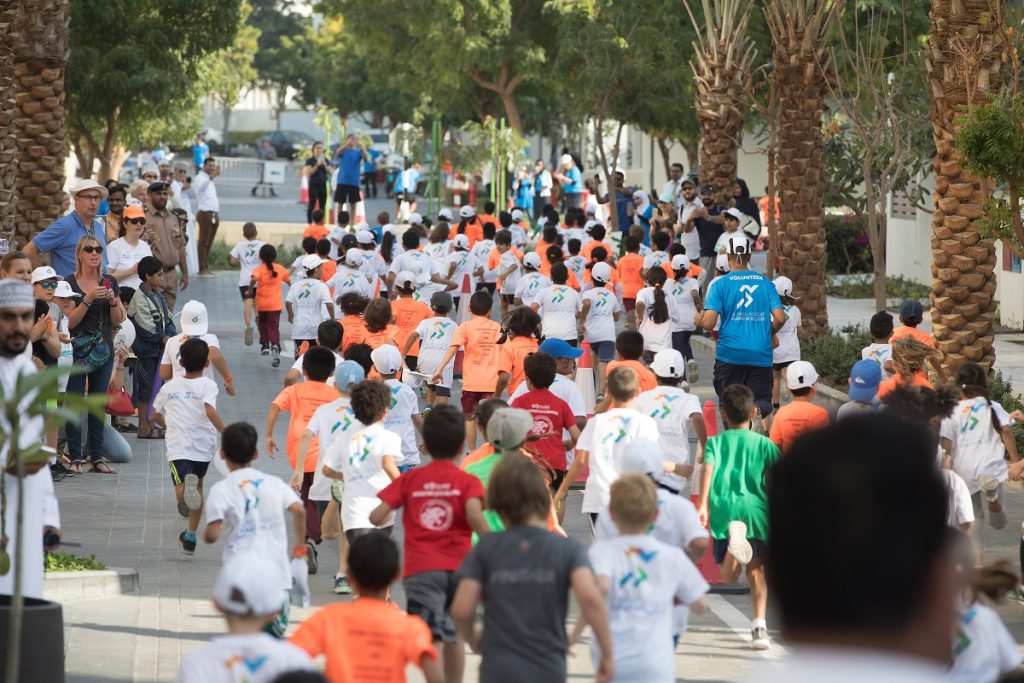 The 2018 Al Mouj Muscat Marathon festival got off to a spectacular start today when thousands of young runners packed the streets of Muscat for the Kids’ Run event. An extraordinary 2374 children – aged from seven to 12 years-old – took part in one of three races to launch the now two-day festival of running.
In what is a new event ahead of tomorrow’s centrepiece Al Mouj Muscat Marathon, the Kids’ Run saw dozens of schools taking part, with Al Seeb International School winning the Most Active School in Oman trophy and 1000 OMR in gym equipment.
The seventh edition of the Muscat Marathon has seen a record-breaking number of 6094 entries across all race categories. With the active support of title sponsor Al Mouj Muscat, official partners Carrefour, BP, Aquafina and Topfruit, and official suppliers Omantel, The Wellness Centre and DB Schenker, the event has gone from strength to strength to become the highlight of the Oman sporting calendar.
“Today has been a wonderful day and it has been truly inspirational to see so many children taking part and enjoying physical activity with their friends and schoolmates,” said Salma Al Hashmi, Oman Sail’s Chief Marketing Officer.
“All this has been made possible only thanks to the marvellous support we have received from the schools who took part, and that of all our partners – starting with Al Mouj Muscat – who have helped make this festival of running what it is today,” she added.
The thousands of children taking part in the Kids’ Run had started to gather from mid-morning ahead of the first start at 3pm, and were entertained in the Al Mouj Race Village by magicians, a marching band, face painters, stilt walkers and the TNT Hip Hop Crew. The BP SME zone also featured an Engineering for Kids display.
Following the races the Kids’ Run prize-giving was attended by guest of honour His Excellency Dr. Ali bin Taleb Al-Hinai, Undersecretary of the Ministry of Health for Planning Affairs, members of the Oman Athletics Association, Nasser Al Shibani, CEO of Al Mouj, and David Graham, CEO of event organiser Oman Sail.
Prizes were awarded to the top three young athletes in each class. In the 1km category for 7 and 8 year-olds the winner was Ammar Al Lamki, with Mudrek Al Hatmi in second place, and Azzan Mohammed in third. In the females category, the winner was Marah Abdulall, followed by Caris Pollock, then Romily Hraham in third.
The 2.5km race for 9 and 10 year-olds was won by Nathan Byford, ahead of Harry Oweno, second, and Millar Bathgate in third place. In the girls category, Assia Samin took the crown, followed by Roukaya Ellkomy, then Rana Al Barwani in third place.
The final 4km race for 11 and 12 year-olds saw Keiji Maruyama take the victory, with Tamam Al Hasni second and AbdulAziz Al Harrasi in third place. With the girls in this distance, Grace Park came first, followed by Olivia Philips, then Kristina Sarah Siju in third place.
Tomorrow will see the highlight of the festival with the full 42km Al Mouj Muscat Marathon itself, the Half-marathon and 10km races, as well as the Marathon Relay category for teams of runners and a 5km Charity Fun Run in support of The Oman Diabetes Association.
The overall 2018 entry list shows there are runners from 86 countries, with large numbers from India, Britain, the Philippines, France, South Africa and the US, along with hundreds more from countries ranging from Australia to Yemen.
With an early 6am scheduled start for those taking part in the Marathon, Half-Marathon and Marathon Relay categories, the Race Villlage in Al Mouj will be open from 5am with a warm-up session by The Wellness Centre and light music by Adam Cole.
Further warm-up sessions and entertainments are scheduled ahead of the 9.30am start of the 10km race and 5km Charity Fun Run.
The festival of running will conclude tomorrow with the prize-giving ceremonies from 10.30am to 12 midday.