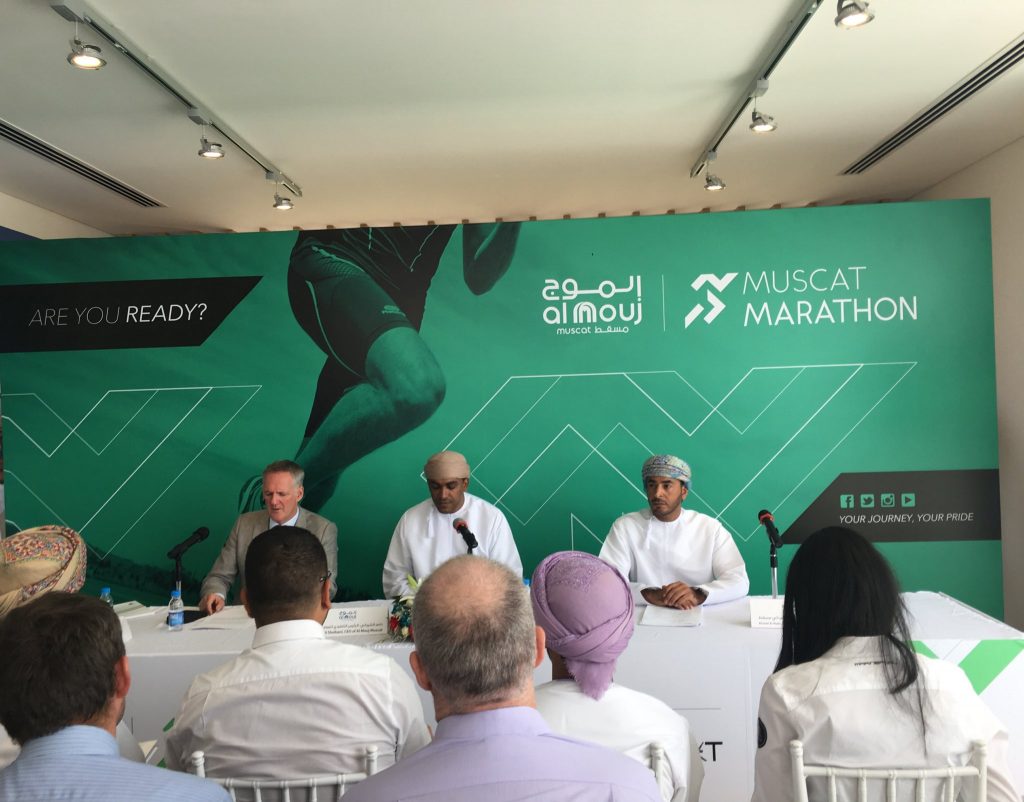 In 2017 three parties came together to demonstrate that a team can be better than the sum of its parts: Muscat Road Runners, Al Mouj Muscat – Oman’s lifestyle destination and Oman Sail. The partnership was an outstanding success, doubling the number of runners, increasing the number of Omani participants and raising the profile of the event locally, regionally and internationally.

In 2018, the Muscat Marathon aims to further its mission to drive inbound tourism, officially opening registration for the seventh edition and launching an exciting new format for the event at a press conference held today at the Al Mouj Muscat Sales Centre. A new logo for the Muscat Marathon was also on display for the first time, a striking and contemporary image that will communicate the event in graphic form to a global market.

Following overwhelming interest last year, the Muscat Marathon will now be part of an extended two-day festival of running to be held on January 18 and 19, 2018. Thursday, the opening day, will be dedicated to a Kids Run for greater engagement with the next generation of runners. While Friday will see the established Marathon, Half Marathon and 10km Race complimented by two new categories: A Charity Fun Run and a Marathon Relay open to teams of four to six runners who will each run part of the full 42km course.

Building on the success of a record field in 2017, the Al Mouj Muscat Marathon will again benefit from the successful partnership of Oman Sail and Muscat Road Runners, the continued support of title sponsor Al Mouj Muscat, the waterfront lifestyle destination, and has received a boost from Tanfeedh, the Omani government’s economic diversification project, which has embraced the fast-growing global sports tourism sector as one of its key initiatives.

“Our partnership with Oman Sail, and the title sponsorship of Al Mouj Muscat, has enabled the event to reach new heights.” said Ahmed Al Malki, Chairman of Muscat Road Runners.

“The exciting new aspects of the race will offer new opportunities for Omani runners, local residents and international competitors of various ages and skill levels to compete and provide a new way to discover our beautiful country.

“In 2017, the marathon took place on one day and saw participants more than double from the 2016 race, from 600 to 1,290. Of this, the number of Omani runners increased from 51 in 2016 to 246 earlier this year. This phenomenal increase shows the appetite of the Omani people to try new activities, dedicate themselves to training and push themselves to excel.”

“Our continuing sponsorship of the Muscat Marathon reflects our belief in the benefits of a healthy lifestyle, which is a key community objective at Al Mouj Muscat.  Al Mouj Muscat with its’ world class facilities, has enabled the sultanate to host international sport events. We are proud of Al Mouj Golf, Oman’s first signature course considered one of the world’s most stunning golfing facilities which hosts international Golf tournaments. Al Mouj Marina, of course, has been providing an international focus to Oman by regularly attracting elite international sailing events.” said Nasser Al Sheibani, CEO.

“It is an honour to be part of the ongoing growth of our wonderful nation and playing a role in promoting healthy lifestyles, encouraging more young Omanis to take part in sport and delivering long-term benefits to the national economy.”

Oman Sail also emphasised that its goals and ambitions were in alignment with Muscat Road Runners, Al Mouj Muscat, the Ministry of Tourism and Tanfeedh.

“In January this year we built on the foundations of a successful event established over several years by Muscat Road Runners. In 2018, we are going further in promoting the marathon to attract more local, regional and international runners,” said David Graham, CEO of Oman Sail.

“The Al Mouj Muscat Marathon meets the Sultanate’s sport tourism goals. It takes many entities within the country to work together to make such an event a success. We have the complete support of those parties and are very confident that this coordinated effort will have a significant positive impact on Oman.”

For the 5km Charity Fun Run, an official charity organisation will be identified and announced to allow competitors to run for a cause.

The 2018 Al Mouj Muscat Marathon routes are currently being finalised. An announcement will follow.

To register for the 2018 Al Mouj Muscat Marathon, please go to: http://muscatmarathon.om