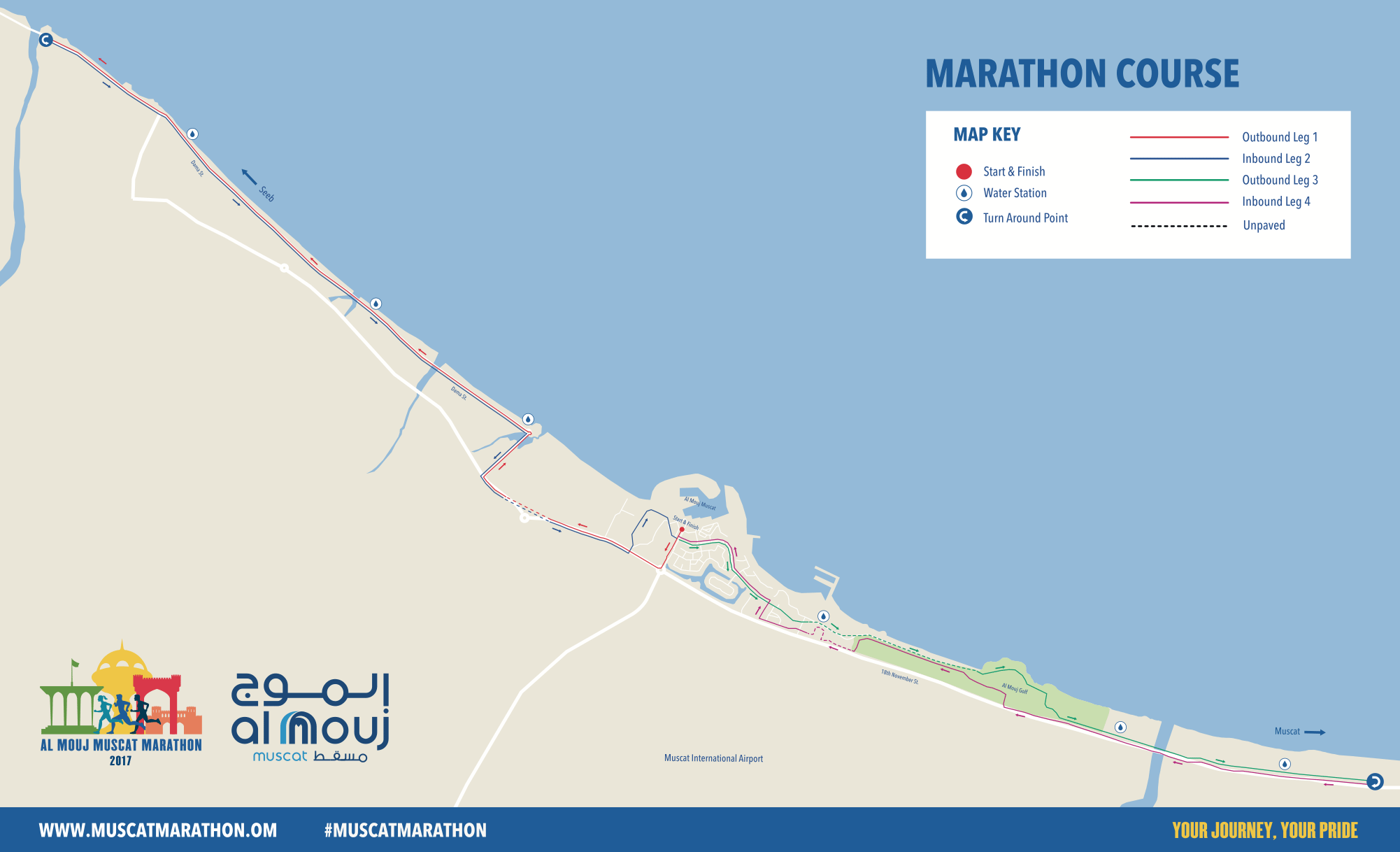 Muscat, January 21st 2017: The routes of the 2017 Al Mouj Muscat Marathon have been unveiled, promising a challenging and exceptional race for the record 1,300 competitors from 74 countries who will be running the roads of Muscat on January 27th. Designed to suit all levels of fitness and ability, the Al Mouj Muscat Marathon offers three separate routes for competitors in the “full marathon” event (42km), the “half marathon” (21km) and the “10km” challenge, though all three will start and finish at Al Mouj, Oman’s leading lifestyle destination and international sailing centre.

“We are delighted to unveil the marathon routes which we hope will help to grow the Muscat Marathon into one of the top in the world, appealing to both runners and supporters,” said Salma Al Hashmi, Oman Sail’s Chief Marketing Officer.

With a record number of entries, the sixth edition of the Muscat Marathon is set to be its most successful yet after organisers Muscat Road Runners teamed up with Oman Sail who have become renowned in the region for organising world class sailing events including the Louis Vuitton America’s Cup World Series Oman last year.

The move was designed to expand the Marathon’s potential by appealing to a larger regional and international audience and in securing Al Mouj as a title sponsor then passing the 1,250 entry target back in December, the marathon is on track to move into the top league, bringing Oman’s growing appeal as a popular destination for sports tourists under the spotlight.

Nasser bin Masoud Al Sheibani, CEO of Al Mouj Muscat said “There is no doubt that sports tourism is one of the most important components of the tourism sector across the world and the Sultanate is no exception. Understanding that tourism is a key contributor to the GDP, Al Mouj Muscat has always been organising and hosting international sport events. We are proud of Al Mouj Golf, Oman’s first signature course considered one of the world’s most stunning golfing facilities. Al Mouj Marina, of course, has been providing an international focus to Oman by regularly attracting elite international sailing events.”

He added, “In this context, Al Mouj Muscat is pleased to be associated with the Muscat Marathon as a title sponsor. The Muscat Marathon which is on to its sixth edition has been attracting an increased number of participants and tourists over the years. Tourism remains a key driver of Oman’s national economy and we are thrilled to be connected to a sporting event that promotes Oman as a tourist destination.”

BP and Oman Air have seized on the opportunity to back the event and 10 of the runners on the start line will be staff members of the oil and gas production giant with visitors to the race village also able to enjoy a special SME exhibition called the “BP Souk”. Oman Air have also set up a special corner at the race village where they will engage with visitors and spectators by tempting them with special ‘give away’ offers for flight tickets to Zurich and Singapore.